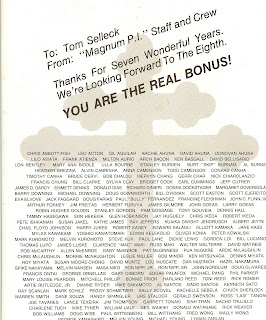 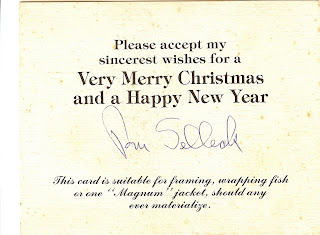 Anybody remember me?  Sorry it's been so long....something about cooking for 43 at 5 different dinners here, cards, wrapping, mailing packages and 3 weeks of decorating.  It was great!  So to relieve my Post Christmas Traumatic Stress Syndrome, I put a ladder up from my library side today and reached in as far as I could under the eaves and managed to pull out a box labelled "Film Stuff."  That's a very scientific technical term, I know.  So the good news is that there is a lot of Magnum stuff in there.  The bad news is that, other than this photo of these 3 studly 80's  guys in their shorts, everything is unfortunately in slide form.  The other good news is that there is lots of stuff I can put on ebay and maybe make enough money to buy a slide scanner for my Mac.  The ones you see for $99 everywhere (I even bought one once) only work on PC's.   And no, I'm not sending you the slides so you can scan them!  So there will be some new posts of what looks like quite a few sets I haven't shown.  You may have to identify most of them as the slides aren't labelled.  Some boxes say "Luther Gillis Den, Guesthouse," "Whorehouse," "T.C.'s LR & Office" and some blank ones.  I think there still should be more slides somewhere, but I could only reach in so far.  The real access to that space is full of stuff.  There is also paper work, stationery, and even an asset list of set dressing for a year among other things.
The man who bought my Magnum jacket a few months ago would be amused to know that instead of the jacket at Christmas, we received this card.  It almost seems strange to see it say "Merry Christmas" on it.   I forgot the jackets took a long time and we were given this card instead.  A little "Magnum humor"  (very little).  The other is a page that we were given (at least mine seems to be an original) of an ad Tom took out in Variety magazine.  In case you don't know, no one ever says "Thank You" in this business.  I always say that fact you haven't been fired yet is the only thanks that you will ever get.  Tom was different and was very appreciative.
So, not the most exciting post, but that's probably going to be it for my inagural blog year of 2008.  I'm going to be away from my computer until January 12 and will start posting again soon after.  I really appreciate all of your encouragement regarding this blog.  May all of my good karma pay off soon with a job in 2009!
The picture is of  my crew members,  Al on the left and Russ on the right, and me with the great legs in the middle.  It was taken outside my office.  Tom's office was off on the right, next door to mine.
I will look forward to posting more next year as long you keep enjoying them!
Hauole Makahiki Hou!
Rick
Posted by Magnum Decorator at 5:54 PM 11 comments: 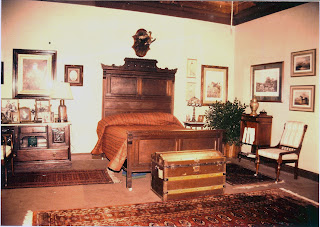 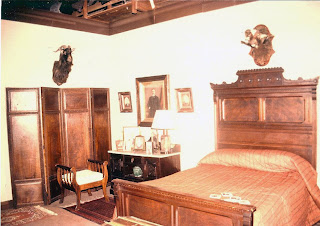 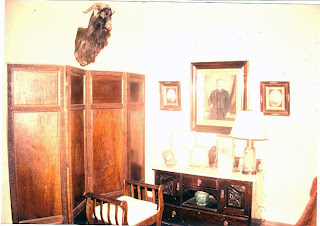 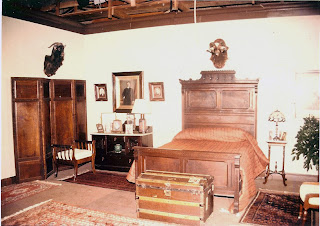 In the hopes that I might find some pictures, I climbed into a storage area under a stairway in my home that I open about once every few years.  I did find a Magnum file that had my original start papers and things from my employment.  I did find some photos printed from some slides.  They were labelled "Higgins' Bedroom.  I do remember doing an another bedroom for him later.  I'm guessing this might have been part of a flashback or something because the walls are just painted and not the usual aged plaster look.  Ironically there is virtually nothing from his original bedroom set posted earlier so there must not have been any interest in continuity.  There is also nothing of mine in this room which tells me it must have been closer to my "end" as the decorator or maybe even after when I became the assistant to the person who replaced me.  I still did many of the sets even though I was never given credit for them.........another long story that I can't put in this blog.  I do have a few more sets to post and then I have got to dig out my oldest files and hope I find the mother lode.  Maybe I could post some "Jake and the Fatman" sets and drive you all crazy trying to figure out which Magnum sets they were?  That wouldn't last long since you're all too smart for me on this subject!
One of the few benefits of unemployment, I mean "availability," is I can really do up Christmas.  With no TV sets to dress, that leaves my house and lots of Christmas stuff I haven't had time to dig out in years.  It doesn't pay much, but it keeps me off the beach.  Hope all you anonymous people out there and my loyal 14 followers are having a good holiday season as well.  Posting again soon!
Aloha,  Rick
Posted by Magnum Decorator at 12:33 PM 14 comments:

'Twas the Week Before Christmas.......or thereabouts 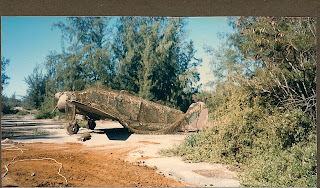 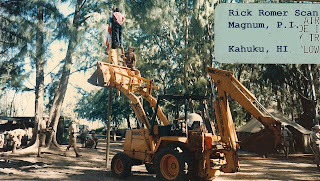 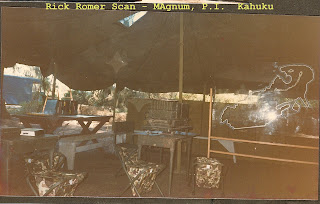 This is my "Magnum Christmas Story."  Sorry, it doesn't involve Santa, little children or puppies.  We were doing some sort of terrorist training camp out in Kahuku on the North Shore of Oahu (like no one would notice) right before Christmas one year.  Normally set dressing does tents, everything in them, and even camouflage netting.  Sometimes the net might be part of the set and sometimes it is used to hide something in the distance like the camera truck, inappropriate signs, or buildings.  The Kahuku location chosen was perfect in every way except for a large trailer home that was used by the caretaker and his family too near the set.  My crew hung a very large camouflage net to cover the house so that it wasn't noticeable from the set.
I think it was the art director who ultimately found the old plane that special effects head, Jack Faggard was to blow up.  Jack was a really good "powder man" and known for his big explosions.  In the film business, while explosive powder is used, it is more for show often blowing harmless pieces of cork as debris.  The actual damaged look might be created later by tools or paint and much more controlled than what might appear on the screen...still, it is an explosion and not always 100% predictable.  On the day of the explosion, all the usual precautions were taken, crew cleared, and the family of the home was allowed to watch from a distance.  Off went the charge--a lot more than was expected--and it looked great!
Moving on to the next scene, the family returned to their home on the other side of our camo net hung to hide their house.  What they found was that all  their windows had been blown out, their Christmas tree was on the other side of the room along with their presents.  Whoops!  So the show paid for new windows, another Christmas tree and I'm not sure what they did about the presents, but I'm sure there were a few more!  The shock wave of the blast had traveled through the netting and right at their house.  Possibly special effects hadn't noticed how close the house was behind the net or maybe it was just a mis-directed blast.  In any case, it was almost not a very Merry Christmas for the family who luckily had watched the explosion.  And they all lived happily ever after.  The End.
Posted by Magnum Decorator at 11:49 PM 3 comments: