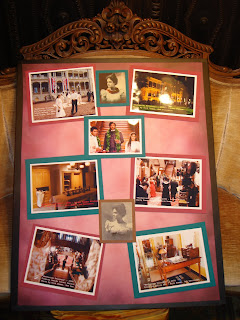 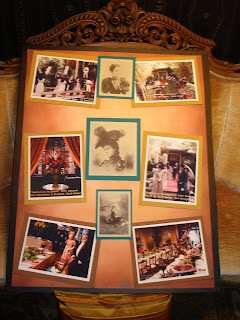 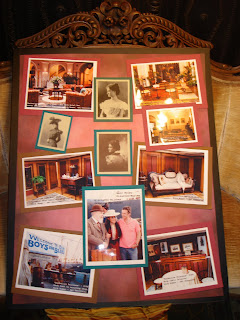 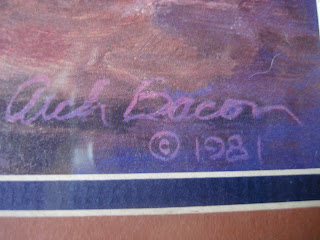 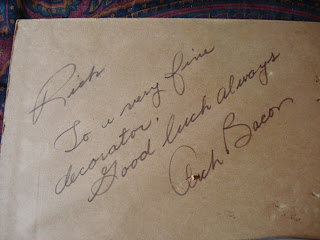 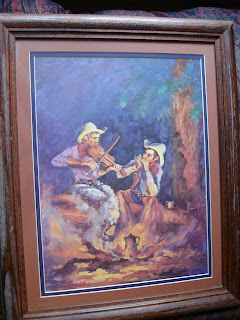 I did post an item on ebay (ending tomorrow) that is related to Magnum.  It's a framed print that Archie Bacon, the show's art director for many years, gave me.  I used it in that episode of Paniolo, but I can't find it in a photo.  Anyway, it's never really had a home since I haven't had an office in 3 years so I thought it could go to a better one.  Someone from Austria has asked about shipping--which I haven't looked up yet.  Actually, it's virtually impossible to tell exact shipping on something that's larger than 14" because of all that "dimensional weight" stuff now and then even more complicated with the foreign aspect.  I know about 5 years ago it was $60 to send a similarly sized item to England so I would guess foreign shipping is going to be at least $100 now.  Just come on over and pick it up!                                                                                                                                                                                                                                      I went to the official opening of what is now being called "Barbarian Princess" last night at the Hawaii Theatre.  It's the first film ever done about the Hawaiian monarchy or the overthrow of it.  From my standpoint, it is also the first and last Victorian period film done here since there is no longer any large source for antique items here without shipping them in.  There are various Hawaiian groups who have been objecting to the use of the term "Barbarian" in reference to Princess Ka'iulani.  Just about everyone watching the movie last night changed their mind if they hadn't already understood that the barbarian reference was from opposition newspaper items of the time who sought to discredit the monarchy during the overthrow in 1893.  I spent a couple of days doing a photo display of the sets and some of the crew during filming for the theatre lobby.  Considering they premiered it on Princess Ka'iulani's birthday you think they might have done something a little more.  Anyway, it sold out and they are already on their 3rd showing as part of the Hawaii International Film Festival.  Unfortunately the film remains unsold and undistributed so don't look for it at your neighborhood 20-plex any time soon.
I went ahead and put in some photos of Princess Ka'iulani in with the set photos as a way of showing her "non-barbarian" aspects and the fact that the movie does certainly honor her.  I didn't see any protesters last night, but there were enough police around to have  intimidated anyone to not even jaywalk--a $120 fine btw.  Someone did ask a question after the movie about when were they doing to drop the "Barbarian" from the title and the director gave a great response and the audience cheered him so I think the title is here to stay.
Mike's question is the first comment under the last post about changes in set decorating now with HD and DVD availability.  I know I've covered this topic before because I did at one point compare doing Magnum with LOST and the "scrutiny" aspects made possible today with DVD stop action and enlargement certainly do contribute to the detail that decorators go to now.  However, I just happened to catch the last half of the 1960's "Time Machine" that was on this morning on TCM.  I remembered seeing that when I was a kid and thought it was such an amazing film.  What I saw today looked like some cheesey amateur production of a low budget student film!  I didn't have to stop any action or enlarge anything to make that determination.  This was a full on Disney (I think) feature film release when it came out in the 60's and yet today it wouldn't fly with any 8 year old.  A lot of it is that we have also become more sophisticated as a society and the level of visual sophistication has increased as well.  Many of the big "spectacle" films of the 50's and 60's look pretty tame now compared to when we so impressed when Moses parted the Red Sea (film shown backwards).  Some things hold up--"The Birds" come to mind.  However, Alfred Hitchcock was aware that our own minds could create better horror than he could on the screen so many of his "effects" were created in our own minds--like when Janet Leigh took her shower with Hershey's chocolate syrup in "Psycho."  Today they have to show the steel knife blade ripping the flesh and red blood squirting out of an artery before anyone is shocked--especially an 8 year old!  So I think the increase in set dressing details today has as much to do with technology (and the ability to scrutinize) as it does with our expectations as viewers.  It certainly doesn't have anything to do with larger budgets!!!
Aloha,  Rick
I continue to post more photos each day on my career pics  http://www.flickr.com/photos/rick_romer
Posted by Magnum Decorator at 7:00 PM No comments:

It takes awhile, but my career photos are now showing up on flickr http://www.flickr.com/photos/rick_romer/  It's sort of a poor man's website, but it's about time I started putting my stuff online.  I made a mistake making my categories too specific and too small.  There doesn't seem to be any way to change or regroup them now.  I'm making the group categories larger now.  I've been listing them by kinds of sets rather than by specific projects and then using tags to allow you to find specific projects.  I have a TV next to my computer that helps break the monotony--although watching 3 Esther Williams movies in a row on TCM was a bit much.
I haven't gotten to any Magnum photos yet.  They are going to premier what is now being called "Barbarian Princess" at the Hawaii Theatre next week so I'm still putting up those photos.  I didn't realize I was making the photos too small so I did go back and change some.  Flickr has a great editing too so I can fix the photos before posting.  This is sounding like a commercial.  Well, it's something until I get a real website going.
Aloha,  Rick
Posted by Magnum Decorator at 6:19 PM 2 comments:

Has it come to this?  Is this going to become one of those blogs where I post what I ate for breakfast and then people comment "mmmmm, yummy"?  Well, I hope not!  It's just that I have basically mined my mind of Magnum memories with 25 years having passed since I was in my 2nd season on the show.  Most of the questions that have been emailed to me recently involved watches, rings, sunglasses used on the show.  Those all fall into props and outside my area as the Set Decorator.  So I don't really have anything new or even old to add to my working on the show that hasn't been written about somewhere in this blog.  Of course, pertinent questions about the show are always welcome.   Do I also need to mention again I don't have anything from the show left, Eve is not giving tours, and there is no secret stash of Magnum furniture?
News from the home front includes the Governor deciding to completely eliminate the Hawaii State Film Office at the end of the month!  It's absurdity rivals the city building its billion dollar monorail that doesn't go anywhere.  With tourism listed as our major "industry" in a year of cutbacks everywhere, it is expected the State is looking to save money.  Our already poor public education system (with the highest percentage of students attending private schools in the nation) is furloughing teachers, programs being cut, and others being planned.  Eliminating a proven money making department that has made getting permits easier and solving problems before they arise is unfortunate.  The State also all but eliminated the film tax credit which was directly responsible for the work I had in 2008 in a double blow to the industry.  While the film / TV industry isn't tied directly to the economy in general, investment in the business is.  Given the lack of government support of the industry here, the plantation mentality of the legislature, the bad economy and the false belief that all the good workers are on "LOST", there does not appear there will be any work until mid 2010.  Currently there is another Lifetime film going on but the Jerry Bruckheimer pilot has been postponed again.  I'm not sure there could be any more nails in this coffin right now.  I guess if professional mourners were paid, I might consider continuing to wait for the phone to ring.  The reality is that I have had some success in other areas and I'm continuing to pursue work in them for now.
I hope that within a week or so I will have most of my past work online.  Until I can get rickromer.com up and running, I think doing flickr albums of my photos is a good start.  Working in a field where photos are the only evidence of my work sometimes makes it more difficult to convince others how good I am!  Present tense, of course.
So I'm not sure if this really counts as a posting or just a rant?  If neither works for you, I did enjoy a bowl of granola, a mug of coffee and a glass of carrot juice.  Mmmmm, yummy!
Posted by Magnum Decorator at 1:18 PM 1 comment: