I've gone ahead and loaded a lot of new photos (unfortunately none of them new from "Magnum") primarily of sets I did for "Hawaii 5-0" http://www.flickr.com/photos/rick_romer/
I think I might actually have too many photos, but it's always hard to decide what anyone might be looking for in my work and ultimately it's about diversity and range and that covers quite a large area. I spent 12 hours and watched several movies while doing it and I see now it's 2:00 a.m. so I guess it's time to quite.
Aloha, Rick
Posted by Magnum Decorator at 4:57 AM No comments: 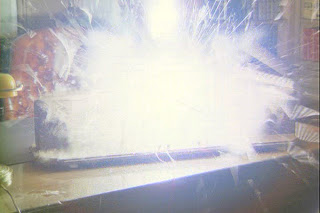 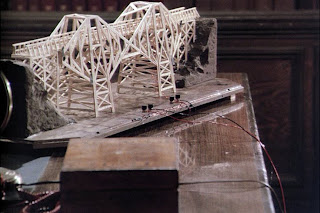 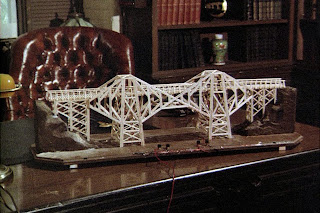 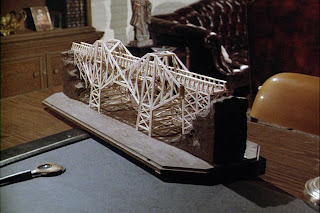 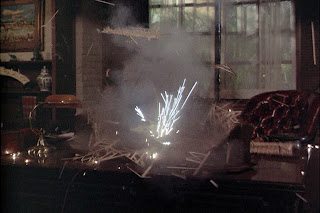 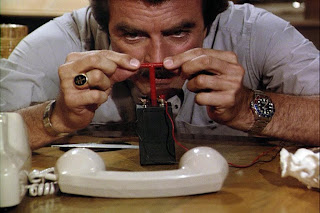 Thanks again for your continued comments about me and the show. I do have some news and pictures to share.
One of our loyal fans who built his own model of the Bridge on the River Kwai sent me these screen grabs from the episode where Tom blows up Higgins' model. As you may recall from an earlier post, I built 3 versions of this model for the show when I was still working up the hill at what's now Diamond Head Theatre as their last resident designer. There was the just started model, the halfway there bridge, and finally the completed one. I was there just off camera when they filmed the scene with Higgins building it. He'd go to place a piece and then they would yell "CUT" and I would take it off, wipe off the glue and get another piece ready. Sure glad I spent 7 years in college for that one!
I wasn't there when they filmed the scene with Tom blowing it up. Well, actually Jack Faggard, the special effects coordinator, did the actual explosion. These screen grabs are great since it really shows the pieces being blown up in the air. What I don't actually know for sure (and yet can still sleep at night) is who built the model they really did blow up? My guess is they completed more of the half done model and blew that one up. The reason I think that is that when I did start working on the show full time in season 3, my Higgins' model was already established on one of his bookcase shelves. Also don't know when the decision was made to place my completed model on the set as permanent dressing.
Well, I hope the gentleman who bought my invoice for the bridge sees these photos. When I was selling off anything I had left from the show on ebay, one person purchased my copies of the invoices I'd sent to the show for building the bridge and a couple of other things and framed them all together. Don't forget you can click on any of the pictures to make them larger. I blew them up a bit and corrected the colors.
Next bit of news for those of you with $10-15 million or so that you don't know what to do with. The estate where the pilot of "Magnum" was filmed (not to be confused with the Anderson Estate where the series exteriors were sometimes filmed) is being sold again. The estate had been owned by the State of Hawaii for decades, then a division of the Teamsters Union (another interesting story best told over a mai-tai) and finally a private owner is now for sale. The man who bought the estate in a very sad condition and spent many millions restoring what was one of the grandest estates ever built in Hawaii (for Clarence Cooke in the 30's) is having to sell it. I did get to tour it last year and gave him photos of some of the sets I had done in the house over the years (sorry, all post "Magnum"). The room with the brick where they did the first Higgin's den is there along with what became the drive-up and entry for Rick's Bar (aka Kamehameha Club) all look fantastic. He also restored the pool house, pool, servants quarters, all the decorative tile on the lanais and put in a kitchen any 5-star restaurant would envy.
The line is amazingly short for those who want to purchase it so you still have time to think about it. I may have some other news soon about my lack of career since "Alvin 3" ended in January. I did join the film board at the Honolulu Academy of Arts--the main film art house in Honolulu at the Doris Duke Theatre. Hope you're all having a great summer! Aloha.
Posted by Magnum Decorator at 9:24 PM 11 comments: