I've been thinking about how to write this for the past few months.  On the one hand starting a new career for anyone has its challenges especially after 30 years of what I've been doing.  The reality is that the TV and film business has changed.  Let's just say they aren't changes that agree with me so changing professions is actually not that traumatic.  Well, spending days on end on the computer with Xcel and Pages can be traumatic at times!  In any case, I am now the Creative Director for a large special events company here.  They don't really have to advertise and we do mostly high end corporate and incentive events, weddings, --well, special, special events!  My creative abilities haven't been used as much as I'd like to see, but it will come and learning the business end first will ultimately benefit me more.

For anyone that doesn't think this was meant to be, about a year ago someone to told me to write down what my ideal job would be.  List everything I really wanted to be doing and the money I wanted to be making.  Early this year a job under "Business and Management" on craigslist appeared--which I never would have seen since I wouldn't have thought to ever look in that category for work.  Anyway,  a friend forwarded this position and what they were looking for almost matched my ideal job list line by line.  Even more bizarre was the date of my first big event was also the same day that the last episode of "The River" on ABC appeared AND the very last thing I worked on in January, one episode of "The Biggest Loser" on NBC.  Now I wouldn't have minded the last thing I worked on not being called The Biggest Loser, but the fact that both appeared on the same day as my first big event was pretty obvious to me that it was meant to be.  So out with the old and in with the new as they say.

As all the jobs I've had my entire adult life have required, I still get off the H-1 Freeway on the Kokohead Avenue Exit each day.  Instead of Diamond Head Theatre or the State Film Studio, it's now my current job.  The film studio is across the street from the Bark Park where I sometimes take my dog.  They are starting up a new series called "Last Resort" where I was doing "The River" this time last year and "Magnum, P.I." 29 years ago.  You would think I would feel something--but, like the lyrics in that song in "Chorus Line"...."I felt nothing."  Even less so when you hear that the"Last Resort" is not about a tourist hotel, but a stolen nuclear submarine that declares itself the world's smallest nuclear nation, or power, or something.......whatever.   Break a periscope!

So that's my news.  My only regret is that I hadn't thought to do this years ago but it's a lot like that thing about the frog being in the pot of water with the stove on.  It's taken finding a new creative profession to make me realize what I've been missing.  I now call on all sorts of dormant experience and talent within the entertainment industry, photography, writing descriptive narratives, lighting, well, you get the picture.

For those of you "of a certain age" who aren't happy with what you are doing--put it out there and see what happens!

"The River" Premiers and What Else Is Going On..... 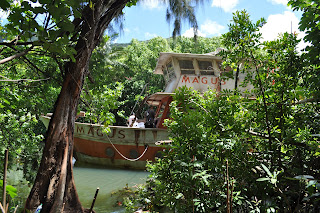 I had watched the pilot a couple of times before last night's premier on ABC-TV. The Puerto Rico filmed pilot was actually only the first hour of the 2 hours with a few reshoots done here. The 2nd hour was the first Hawaii filmed episode attached to it. Some of the sets in the first hour were shipped to Honolulu and some were actually on the real boat they shot. The second hour from Hawaii matched pretty well even though the boat was now a large, floating piece of styrofoam and we did the best we could to match the set dressing rented for the pilot in Puerto Rico even though we had to go by screen grabs and figure out what some of it even was. A little confusing even to us! In general, though, most people were too scared to notice what did or didn't match from the first hour to the second. Unfortunately, they did use up 1 of the only 7 episodes filmed by attaching it to the original 1 hour Puerto Rican pilot so that only leaves 6 Hawaii episodes to go.
The reviews were generally good but concerns were over losing 20% of the audience in the 2nd hour. Since they are primarily going after the desired 18 to 49 year old demographic, that isn't much of a drop. Putting the show on against the tired old, but still popular, formula crime shows gave it some heavy competition.
All those night scenes in the jungle were actual night scenes in the jungle and that poor cast and crew spent many a day on completely opposite schedules as the rest of us while working 6:00 p.m. to 6:30 a.m. We did the opposite hours getting things ready for them.
They have gone in for action first rather than exposition first. In other words, we didn't learn a lot about all of the characters in the first 2 hour pilot, but you will find out more specifics about each character in upcoming episodes. However, like "LOST" before it, for every question they answer, you will also be left with more unanswered ones to ponder.
As to my personal thoughts on the show, I think given the current interest in walking dead, zombies, and the supernatural on mostly cable channels, this is a good entry for the mainstream networks audience. I never did buy into the formula crime shows that have inbred and spun off themselves with more title letters than I can recall (N.C.I.S.U.V.D.N.A. 5-0), I think this is a new direction and something different that can develop over time. They haven't resorted to things like the smoke monster or time travel that "LOST" did and still remained on top so I hope it is a success. However, TOO successful and I'd probably be replaced by someone "more important" so I'll just take regular success for now!
I did a week on the reality show "Biggest Loser" that was here filming a Hawaii segment. VERY different style of working with a reality show. Whereas I am used to doing things "right" and "perfect," or "real," the reality show is more about "it is what it is." Kind of frustrating, but that's part of their look and way of filming. Didn't get the new "Last Resort" pilot here. It's not about a Hawaiian resort but a rogue nuclear submarine crew that doesn't fire the missile as ordered. Normally pilots don't like to build big sets without knowing their future as a series, but this one is going to have to build one and that set dressing isn't going to be found at the local Radio Shack or used nuclear submarine parts store near you. They are also using the director of "Casino Royale" to direct this pilot. That means 007 meets TV pilot budget and schedule 2,500 miles from Hollywood. I'm seeing that double O more like "oh, oh" but then again thats also a zero in my income so I'll just wish them well and move on.
Posted by Magnum Decorator at 3:43 PM 2 comments: