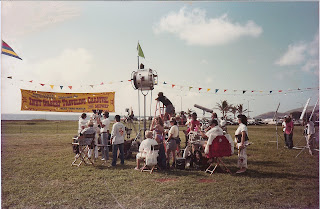 Now that I'm getting to the remains of the current photo collection, this is the only photo I have  representing the main filming company.  It was an episode that had some sort of carnival or side show plot.  It was set up at Sandy Beach on the eastern end of Oahu without regard to the very high winds that can happen there.  I remember that was a big problem but not finishing at this location was an even bigger one.
The time it takes to film a scene depends on many variables:  the actor (mood, memory or mind), "wardrobe malfunctions," equipment, weather, and (more than once) how big the director's hangover was.  When it appears that the company may not finish filming a scene at a location and will not be able to return to finish, a decision has to be made how to complete the scene(s) without having to return and still maintain continuity.  At this particular location, the wind was a real problem.  Keeping an entire carnival set up at a public location until the time was found to come back was not an option.  It was determined at some point that part of the location set would have to be moved back to the studio backlot to complete the scene as part of another day.  Unfortunately it happened to include the ferris wheel.  It's odd to think of a ferris wheel as set dressing, but in this case it was.  Luckily it was the amusement company that was responsible for actually moving it while we began duplicating the rest of the set.  Back then all we had to go by were polaroid film shots--not always the clearest to see the detail.  Now  everything that is recorded on film is also on digital video and available immediately.  All film is only processed in L.A.    Sometimes it was as easy as putting an actor against a wall of the same color and hanging the same picture or drapes hopefully from the original location that could be moved.  There were times when one scene in a room might have been
filmed many miles or days later than the rest of the scene.  I know I had to try and find some drapes and items to match some things to match one of the sets that had been shot in England.  I offered to go get them but..............    Ultimately all I can do is come close and hope no one notices--and usually no one does.
Getting back to the scanning problem of  my Magnum slides,  thanks to Google, I found a company that claims to do high quality scans at a very reasonable rate.  Decent slide scanners start at $800 and the better ones at $1,600.  I don't think I have enough Magnum memorabilia left to pay for half of one, so at .29 cents each, this company appears to be the winner.  The slides are actually scanned in India!  They are cleaned, scanned at 3,000 dpi, put on a disc, I can delete online, and then they are mailed back with a disc.  Sounds a little too good to be true, but I'm going to risk it.  It takes about 3 weeks and I may just do a few to start.  As these are slides, there are no duplicates or back up if something happens.  Anyway, given the time and money it will save, I think it's worth giving it a try.  So I'll stretch the remaining scans, tell a few jokes, and before you know it, I hope I will have some more photos to keep this blog going awhile longer.  I'd sure miss the applause!  Thanks again for viewing.
Aloha,
Rick
Posted by Magnum Decorator at 12:00 AM 9 comments: 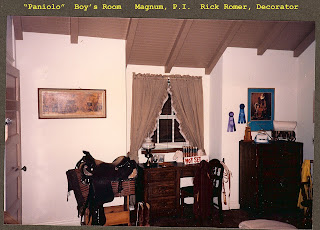 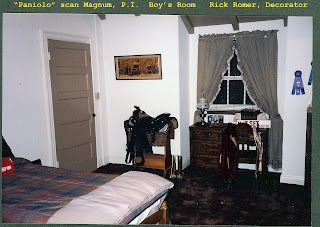 Iguess I was so happy to have found the first 3 photos, I didn't notice I had 2 more.  I don't remember whose room this was, but he must have really liked horses to keep his saddle in his bedroom!  (or maybe some other reason I don't want to know about?)  Over his dresser is a print of one of Archie Bacon's cowboys.  He was the last Art Director I'd worked with on the show and had designed this room that we furnished.  He was a good artist and did a lot of western / cowboy drawings and even some sculptures during his slow times at work.  Wow, slow times at work??  Those WERE the good old days!  Nowadays, 14 hours is hardly enough.  I had to laugh at the hat on the dresser that says "paniolo" which was the name and theme of this episode.  Probably a good find of mine from the Goodwill or Salvation Army store.  No, I didn't dye the drapes to match the ceiling and door color, but it almost looks like it in the photo.  The absence of any age or character on the wall surface makes this set look less believable.
I see we used 2 "Hot Set" signs on this set.  As I recall they were ignored since the film company was still on the Big Island and this set just sat there. More than one person was caught napping on the bed.  Notice the floor was carpeted as were all of our sets (unless they were tiled or some other floor covering).  I could almost say that I would eat all of the carpet that was ever actually seen on this show--and still be hungry!  As it was difficult to store or reuse carpet (since it was cut to fit each set), most of the crew had Magnum carpet in their homes.  Universal Studios policy was that all materials (including lumber, molding, etc.) had to be disposed of and not given away.  Since we were 2,500 miles away from their watchdogs, this rule was often ignored.  I don't think the word "recycle" was used back then and all those rain forests were still there just waiting to be cut down.  I used to smuggle the discarded molding out and give it to the theatre up the hill where I used to work--ok, maybe a few pieces wound up in my house, too.   I think the statute of limitations has run out after 20+ years anyway.
Aloha (and stay warm!)  It's down into the 70's here today!
Rick
Posted by Magnum Decorator at 12:18 PM 4 comments: 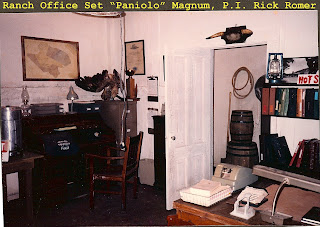 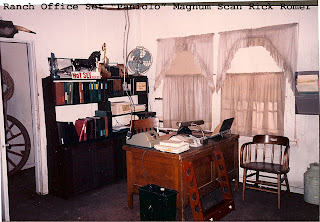 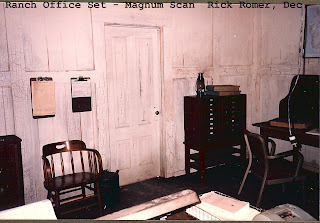 Maybe I should get out more, but it still amazes me that only 3 weeks ago was Christmas Eve, 2 weeks ago I was in New York City, last week in Minneapolis, and here I am back in Honolulu with a month's worth of Christmas decorations to take down.   While I was on the mainland, I did see an ad for a drugstore that scanned slides and photos, so there must be a place here that could do the same for me.  I'm kind of down to the dregs on what photos I have left, but something will work out.  I've had so many encouraging comments from you that it's the only applause I get these days!
These photos were from an episode called "Paniolo" which is the Hawaiian word (I think with a little Portuguese influence) for cowboy.  This was one of the few times an episode was partially filmed off the island of Oahu.  The only others during my tenure were the one on the cruise ship and the one when they went to England (and Tom met his future wife).
A new luxury hotel on the Kohala Coast of the Big Island was opening and offered us rooms for "promotional consideration."  I remembered we scouted several big cattle ranches on the Big Island (Hawaii) which is larger than all the other islands combined.  At the time it was home to the largest privately owned cattle ranch in the USA (Parker Ranch with over 250,000 acres and 50,000 head of cattle).  The last owner, Richard Smart, had a career on Broadway and I was the designer of the theatre he built in the town surrounded by his ranch.  Ok, digression over, we wound up shooting on Monty Richard's Ranch, the name of which eludes me.
Some of the interiors were still built on the soundstage in Honolulu which are shown here.  I did spend some time on the Big Island with my crew, but most of the work for me was back in Honolulu.  As much as I would have liked to have spent some time at this incredible resort, it was a little difficult to hide behind the umbrella in my mai tai by the pool, so I went back to Honolulu and left my crew to deal with the bales of hay and horse poop at the real ranch.
This set looks like they had a sale on crackle paint but regardless, it's appropriate for a rustic ranch office.  If you wonder why that cord is hanging in the middle of the set, normally set dressing is responsible for hanging any visible, "practical" light fixtures.  Then the electricians hook them up.  In Hollywood they actually have a separate fixture crew to do this.
The HOT SET sign is Hollywood language for "Don't Touch."  Technically it's supposed to refer to a set that has been partially shot and needs to remain intact for continuity purposes until filming is complete.  Sometimes we would just use the signs so the crew (or extras) wouldn't have lunch on it, but more than once we would find someone taking a nap on a bed or sofa.  If the items were rented and had to go back in new condition, I just wish stun guns had been invented back then.
I think this set would still hold up today--maybe some old photos on the walls and I'm not sure what I was thinking with those curtains.  Maybe they were on sale along with the crackle paint?
Aloha,  Rick
Posted by Magnum Decorator at 9:00 PM 4 comments: